Conservative MP Rehman Chishti, who was until last month the Prime Minister’s Special Envoy for Freedom of Religion or Belief, is introducing a Bill to the House of Commons today to bring about legal recognition of humanist marriages in England and Wales, with cross-party backing.

END_OF_DOCUMENT_TOKEN_TO_BE_REPLACED

Judgement was given this morning at 10:30 at the Hight Court in the case brought by six couples seeking legal recognition for Humanist marriages in England and Wales. The couples were seeking a declaration that the UK Government’s refusal to give legal recognition to humanist marriages in England and Wales was a breach of their human rights, which must be remedied.

High Court judge Mrs Justice Eady DBE ruled that the failure to provide legally recognised humanist marriages means that “the present law gives rise to… discrimination”. She also ruled that, in light of that, the Secretary of State for Justice “cannot… simply sit on his hands” and do nothing. However, she said, given that the Government is currently giving the matter consideration in the form of a review into marriage law by the Law Commission, the Government’s refusal to act immediately can be justified “at this time” and concluded, “Although I may deprecate the delay that has occurred since 2015, I cannot ignore the fact that there is currently an on-going review of the law of marriage in this country.” As a consequence, she declined to make a formal declaration that the Government is acting unlawfully at this time.

In the court hearing, the Government had argued that the couples had no right to humanist marriages, on the spurious basis that humanist marriages are not sufficiently connected to humanism to merit legal protection. At the same time, they also argued that English law already provides for humanist marriages by way of civil marriage. But in her decision the judge rejected these arguments, saying that there is an intimate link between couples’ beliefs and their choice of a humanist ceremony, reasoning, “in particular, in the way in which couples prepare for their wedding with their celebrant, in the statements made during the ceremony and in the emphasis on individual freedom of choice.”

The judge said that attention must now turn to the Government’s promised review of marriage law as the way that this discrimination must be addressed. The Government said in court that a consultation would be published in early September by the Law Commission.

Conservative Humanists Chairman James Baird commented: “While it is disappointing that the judgement raises questions about the best way of legally recognising Humanist marriages, and allows the Government more time to conclude the on-going legal review; the judgement does serve to make clare that it is now a matter of when, not if, Humanist marriages will be legally recognised in England and Wales. We hope the Government will take notice of the ‘discriminatory’ ruling, and act as quickly as is practical to restore equality for the thousands of couples each year who choose a Humanist wedding.”

Humanists UK has welcomed the court making clear that the failure to provide legal recognition of humanist marriages cannot be justified other than by saying that there is a review to redress the issue, but expressed disappointment at the Government being given more time to resolve the issue, particularly given how long humanist couples have already had to wait for legal recognition.

Humanists UK Chief Executive Andrew Copson said: “We’ve waited nineteen years for this reform since it was first considered by the Government in an ultimately abandoned review of marriage law, and seven years since Parliament gave the Government the power to bring about legal recognition of humanist marriages without requiring a new Act. Thanks to this judgment, it is at least now not a matter of if humanist marriages will be legally recognised but when, and we await the Government’s response to the judgment and their proposals to remedy the discrimination that has been identified by the court. We hope they will act quickly to give justice to the thousands of couples annually whose weddings are being denied legal recognition.”

Humanists UK had hoped that the judge would have made a declaration of incompatibility in respect of the current state of marriage law, to mark the breach and vindicate the rights of the claimants. Such an outcome would not have interfered with the current law reform process but would have sent a stronger message to the Government about the need for change.

Mr Copson continued: “For the particular couples who brought this case, although it is gratifying that the judge has recognised that failure to change the law is “discrimination”, it will of course be a great disappointment that she has not found a breach and has, instead, said they must wait for the current Law Commission review to conclude to find out how the Government will remedy this. We know that the claimants will now be considering whether to appeal. If they decide to do so, we will support them.”

The claimants are being represented by Ciaran Moynagh of Phoenix Law, Caoilfhionn Gallagher QC of Doughty Street Chambers, and Steve McQuitty BL of the Bar of Northern Ireland. Humanists UK has been supporting them in bringing the claim.

Ciaran Moynagh, solicitor at law firm Phoenix Law, said: “Notwithstanding our disappointment we are greatly encouraged by the contents of the Court ruling as the substantive argument has been won. Focus now shifts back to the Government to urgently provide assurances as to when legally recognised humanist marriage will come about. If these assurances are not forthcoming it is likely this legal journey will continue.”

You can see the full text of the judgement here.

One 8th July, the hearing concluded in the High Court legal challenge that six couples have taken over the legal recognition of humanist marriages in England and Wales. At the end of the hearing, the judge reserved her decision until a future date. Their case is being supported by Humanists UK.

Reserving her judgment, Mrs Justice Eady said that she doesn’t know when she will return a decision, but, recognising the importance of the matter to the claimants, intended to give the matter her priority. It is therefore hoped that the judgment will be returned soon.

At the end of the hearing, Humanists UK Chief Executive Andrew Copson commented: “We are glad these couples have had their day in court, after two years of hard work getting to this point, and on a hugely important issue that has been at the top of our agenda with the Government for a decade now. We very much hope the judge rules in our favour and look forward to receiving her decision in due course.”

Ciaran Moynagh, solicitor at law firm Phoenix Law, said: “The Court hearing is another significant milestone in what has been a protracted journey for legally recognised humanist ceremonies. We are confident that the legal principles and human rights arguments raised hold strong weight and we look forward to receiving a judgment in due course.”

Conservative Humanists Chairman James Baird added: “The six couple have had their day in court, we can only wait for the judge to return her verdict on this hugely important issue and hope that she rules in favour of the clear case for legalisation.”

The humanist couples are taking the case to try to compel the UK Government to change the law to recognise humanist weddings as legally recognised marriages, as is the case for humanist weddings in Scotland and Northern Ireland and for religious weddings across the UK. Their lawyers will argue that the current law discriminates against them because of their humanist beliefs and is therefore incompatible with human rights legislation, which precludes such discrimination.

The six couples challenging this discrimination lodged their case at the High Court in November last year. Permission for the case to be heard was granted by the Court on 2 March, with the full hearing due to happen on 7-8 July. After permission was granted, the claimants offered to negotiate with the Government over possibly settling the case, particularly in light of the coronavirus pandemic, but this offer was refused. It is now hoped that the case will lead to a change in the law in time to help deal with the huge backlog of demand for marriage services that is now occurring due to the pandemic.

Humanists UK Chief Executive Andrew Copson commented: “Couples who have humanist weddings see that day as the epitome of their love and commitment to each other, and all they want is the same legal recognition for that as is given to every religious person in our country. We have tried for decades to address this glaring double standard. Government has dragged its heels and that’s why it’s been left to these couples to bring this case. As more and more non-religious couples choose to have humanist weddings, we need a law that works for all people who want to marry and we hope this case will lead to reform.”

The claimants are being represented by Ciaran Moynagh of Phoenix Law, Caoilfhionn Gallagher QC of Doughty Street Chambers, and Steve McQuitty BL of the Bar Library of Northern Ireland.

Ciaran Moynagh, solicitor at law firm Phoenix Law, said: “The time for asking to be accommodated is over. The Courts are now the only appropriate and realistic method of moving this issue on. Following a successful case in Northern Ireland momentum is on our side and I believe couples who look forward to a legally recognised humanist ceremony should take great heart and hope from that.”

Conservative MP Crispin Blunt, Chair of the All-Party Parliamentary Humanist Group, and Patron of Conservative Humanists commented: “The Government has been considering bringing about legal recognition of humanist marriages for some seven years now, over three different reviews. In this context it is understandable that these six couples have given up waiting and decided to resort to legal action. Further, it has never been more urgent than it is now to extend recognition, since the coronavirus pandemic means that there is a long backlog of demand for civil marriages. Stopping people from having to have both a humanist wedding and an unwanted civil marriage in order to gain legal recognition is a clear way to unclog that backlog.”

Conservative Humanists chairman James Baird commented: “While it is sad that it has taken a High Court case to bring this issue to the full attention of the Government, that the power to grant this recognition was given some seven years ago, but has not yet been enacted makes this a necessary step to seek positive action on this issue.”

Conservative Humanists will be present to contribute to a discussion on “What is Humanism?” at Goldsmiths, University of London, alongside Andrew Copson of the British Humanists Association, BHA Young Humanists and South East London Humanists. Tickets are available from GoldsmithsSU. The event is organised by the Goldsmiths Atheist, Humanist and Secular Society. 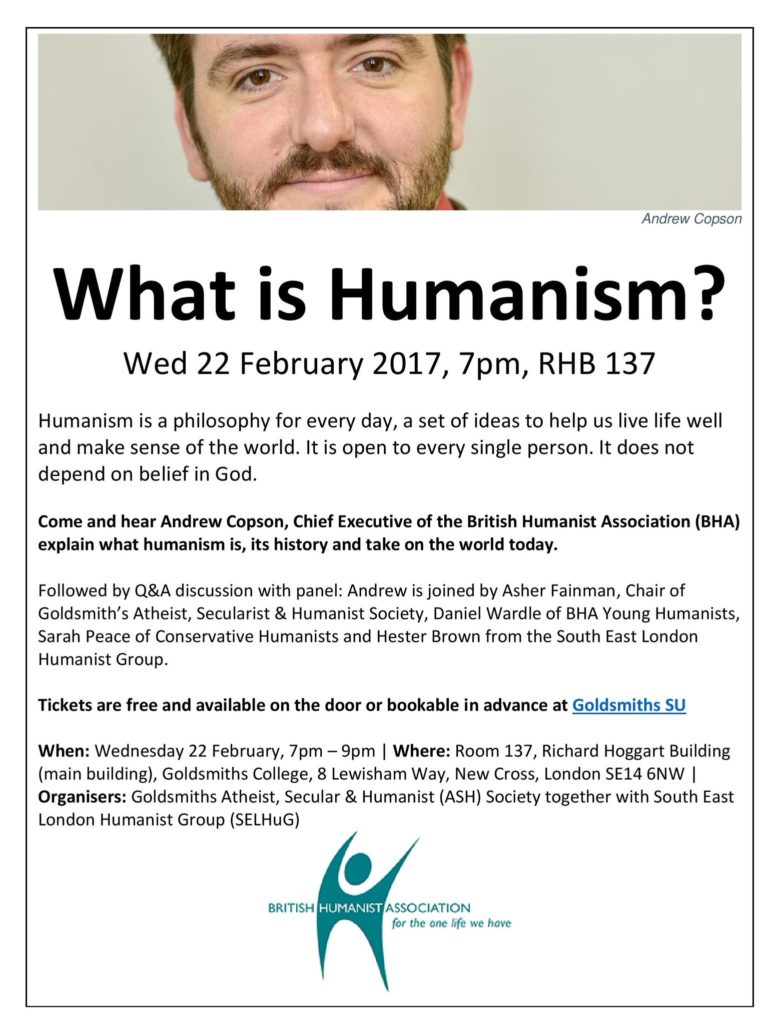 During the Conservative Party conference in Birmingham this weekend, the Conservative Humanists will be present. Members of the public are welcome to visit our stall to find out more about what we do.

The website for the Conservative Humanist Association is conservativehumanists.org.uk