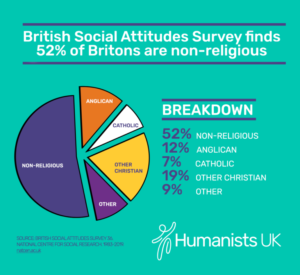 The British Social Attitudes Survey (2018) found that 52% of Britons are non-religious. Many people, even if they do not call themselves humanists, have humanist beliefs and values. Organised Humanism is the tip of a very large iceberg.

Roughly speaking, the word humanist has come to mean someone who:

However, definitions abound and there are longer and shorter versions. The fullest definition to have a measure of international agreement is contained in the 2002 Amsterdam Declaration of Humanists International.