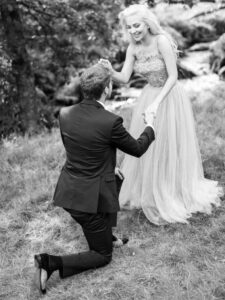 WHY IS IT AN ISSUE?

We believe that non-religious couples deserve the right to have a marriage ceremony that fits them as people, and that is legally recognised, just as religious people can. You might ask why it’s different from a civil ceremony, but a civil ceremony cannot be tailored to the couple, and cannot include any reference to the couple’s beliefs. You might also have heard that other religious marriages (like Muslim marriages) are also not legally binding, and must be registered by means of a civil ceremony as well. Mosques can register as places of worship, and in doing so, gain the ability to perform legal marriages. Many choose not to, as sharia ‘law’ does not require civil recognition for the marriage to be valid, so the issue is that they choose not to perform legal marriages, as opposed to being unable to do so.

WHAT’S THE SITUATION ELSEWHERE IN THE UK?

You may have heard about the popularity of Humanist weddings in Scotland, some 22% of all marriages in 2018. Humanist ceremonies overtook the Church of Scotland as the largest provider of belief based marriages in 2016, following their legalisation. In Scotland, this was in 2005, in the Republic of Ireland in 2012, and in both Northern Ireland and Jersey in 2018. Guernsey is reviewing its marriage laws, and has agreed the principle that Humanist marriages should be recognised. There is currently no legal recognition on the Isle of Man. As for England and Wales, legal Humanist marriages have been on the statute books since 2013, but the statute has not been enacted. This means that it simply requires a statutory instrument to be enacted for Humanist marriages to become legally binding in England and Wales, not a new or changed law.

You can meet with, or write to, your MP about this, and ask them to: